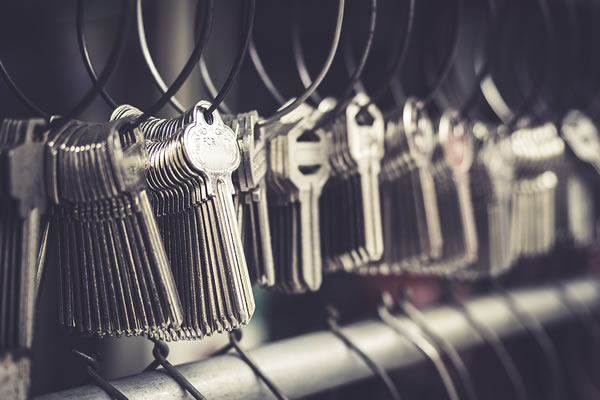 Did you know, the earliest known locks are over 6,000 years old? The first locks are believed to have been invented by the ancient Mesopotamians. They were made of wood and very similar in design to some locks we use today. Just like a lot of modern locks, they had different length pins that required the correct key to open it. Its possible that the inventions of these locks helped to keep items secure and possibly left some security guards out of work! These locks remained the standard until about the Middle Ages.

Locks that were made completely of metal are believed to have been created in England in the Middle Ages. This lock, known as the warded lock, is still in use today. The warded lock involved a series of plates that kept the key from turning unless the key and the notches were an exact match. With the invention of the warded lock began the first era of locksmiths. Locksmiths were skilled craftsmen and metalworkers who designed the locks and keys. While these locks were an improvement to the older models, they werent perfect. If someone with the right knowhow and tools wanted to break into a lock, they could still create a master lock to get into almost any lock. These master locks were known as skeleton keys. These skeleton keys are now collectors items and can be sold for quite a hefty price.

The industrial age brought about new technology and changes to locks. In 1778, the first ever double-acting tumbler lock was introduced. Its inventor, Robert Barron, claimed that it was the most secure lock ever invented. Unfortunately, it wasnt long before someone was able to pick that lock. Shortly after, a new lock was patented by Joseph Bramah. Bramahs lock remains almost unchanged today and is still being manufactured in London.

Thanks to Bramahs new lock creation, the British Government held a contest in 1917 for the design of a new lock that was 100% impenetrable. Jeremiah Chubb, the winner of that competition, added one keen enhancement to the lock. He added a detector system that would jam the lock if the wrong key was inserted. Then came along Alfred Hobbs who successfully picked that lock, the same American locksmith who picked the original Bramah lock after spending two long days trying.

In 1843, the pin and tumbler lock was patented by an American locksmith. This lock system brought things back to the basics similar to the Egyptian designs and unlike the fancy British locks. The patent holder, Linus Yale, also invented the modern day keys that are still in use today.

If youd like to learn more about the history of locks or are in need of any one of our variety of locksmith services, our team at Top Atlanta Locksmith is equipped and ready to help. Were available 24/7, 365 days a year for auto, home, or business locksmith services. Give us a call or schedule online today!